3 Facts to Know About Glaucoma 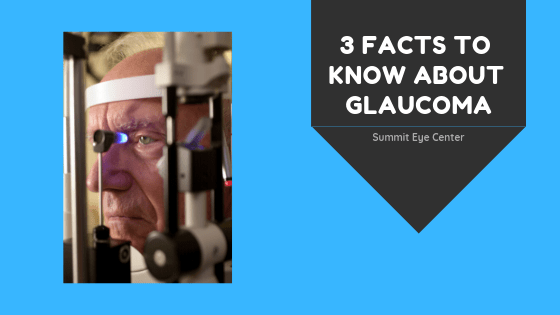 It is Glaucoma Week. As a result, this week’s blog will feature three facts you should know about glaucoma.

Glaucoma is a progressive disease of the optic nerve that can lead to vision loss or blindness. The optic nerve is a bundle of over one million nerve fibers that transports our visual information from the eye to the back of the brain where it is processed. In the early stages of glaucoma, there are often no visual symptoms. This has led to it being called “the silent thief of sight”. Studies have shown that up to half of the nerve tissue needs to be damaged before changes are noted in one’s vision. Unfortunately, once damage occurs, it is permanent. Thus, early detection is critical to preserving one’s vision. A dilated eye exam is critical to early detection. Some studies show that as many as 50% of those with glaucoma are unaware that they have glaucoma.

Who is at risk of developing glaucoma?

The risk of developing glaucoma increases with age. Everyone over the age of 50 should have yearly dilated eye exams to aid in detecting early signs of glaucoma.

Having a family history of glaucoma increases one’s risk of developing glaucoma. The highest risk is if it is a first degree relative such as a parent, sibling or child.

How is glaucoma treated?

Selective laser trabeculoplasty is an office-based laser treatment that increases the outflow of fluid from within the eye. This procedure is effective in about 80% of patients. Due to its good safety profile, it can be considered a first-line treatment instead of an eye drop or used in addition to an eye drop to better manage a patient’s eye pressure.

MIGS, minimally invasive glaucoma surgery, is a relatively new group of surgical procedures that combine a good safety profile with the ability to lower a patient’s eye pressure. These procedures can reduce the number of medications that a patient needs to use and also decrease the need to move on to more aggressive surgical procedures.

Trabeculectomy and tube shunt surgery are procedures that can greatly reduce the pressure within a patient’s eye and possibly eliminate the need for medications. These procedures are more aggressive than the procedures stated earlier in this blog and therefore carry more risk for complication.

The doctors at Summit Eye Center focus on the diagnosis of treatment of glaucoma. They provide both medical and surgical management of glaucoma. If you have a question about glaucoma, the eye in general, or would like to schedule an examination, call us at 816-246-2111 or email This email address is being protected from spambots. You need JavaScript enabled to view it.. Remember, early detection is the key to successful management of glaucoma.

Our blog posts are written by our team of highly skilled eye doctors:

Dr. Kevin R. Skelsey, M.D., F.A.C.S. is a board-certified ophthalmologist. Dr. Skelsey attended medical school at the University of Texas Southwestern Medical Center and completed an internship at Presbyterian Hospital in Dallas. Obtaining his ophthalmology residency training at Parkland Memorial Hospital, Dr. Skelsey now provides a wide variety of ophthalmology services. Dr. Skelsey is a Fellow of the American College of Surgeons. He is a member of several medical organizations and has served as a past president of the Missouri Society of Eye Physicians and Surgeons.

Dr. Kelsey J. Kleinsasser, O.D. earned his Doctorate of Optometry at the Illinois College of Optometry. He completed externships at the Illinois Eye Institute in Chicago, IL, Omni Eye Specialists in Baltimore, MA, and Westside VA in Chicago, IL. Completing a residency in cornea and refractive surgery, Dr. Kleinsasser also provides a wide variety of eye care services. He is a member of several medical organizations and has served as a past president of the Heart of America Eye Care Congress and Optometric Society of Greater Kansas City.

Along with our team of dedicated support staff, Dr. Skelsey and Dr. Kleinsasser strive to provide the highest level of eye care treatment customized to the unique needs of each patient. Schedule an appointment today to meet Dr. Skelsey, Dr. Kleinsasser, and our team at Summit Eye Center.

Get In Touch with Us